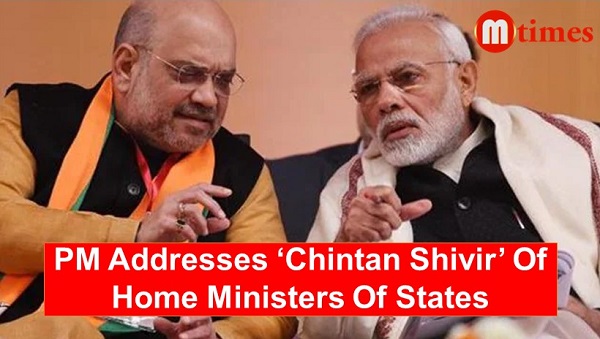 >> “Chintan Shivir is a prime example of cooperative federalism”

>> What is Chintan Shivir?

In his address to the gathering, the Prime Minister praised law enforcement personnel for their efforts to ensure a peaceful environment during the festival season. He described the Chintan Shivir as a model of cooperative federalism.

The Prime Minister stated that as the country’s strength grows, so will the power of every citizen and family in the country. He said, “This is good governance where benefits reach even the last person standing in the queue in every state. The Prime Minister emphasized the link between the law-and-order system and the development of the states. “It is very important for the entire law and order system to be reliable. Its trust and perception among the public are very important”, he pointed out. He noted the growing identity of NDRF and SDRF during times of natural calamities.

The Prime Minister stated that crime is no longer localised and that interstate and international crimes are on the rise. As a result, mutual cooperation between state agencies and between central and state agencies is becoming increasingly important. He stated that, whether it is cybercrime or the use of drone technologies for the smuggling of weapons or drugs, the government must continue to work on new technologies to combat the threat.

The Prime Minister said that in the Laws enacted by the central government a will to strongly handle corruption, terrorism and Hawala, is clear. “Laws like UAPA have given strength to the system in a decisive battle against terrorism”, he said.

What is Chintan Shivir?

The Chintan Shivir of Home Ministers is an endeavour to provide a national perspective to policy formulation on internal security-related matters, in accordance with the  Panch Pran announced by the Prime Minister in his Independence Day speech. The Shivir, in the spirit of cooperative federalism, will bring more synergy in planning and coordination between various stakeholders at the centre and state levels.

The Shivir will deliberate on issues like the modernisation of police forces, cybercrime management, increased use of IT in the criminal justice system, land border management, coastal security, women’s safety, and drug trafficking among others. Transformation of Food Corporation of India to be done on a fast track mode: Piyush Goyal

Jai Bhim is not just a word it is an emotion: Director Tha. Se. Gnanavel